This is the second article of a 4-part series on the EVM; 1. Part 1: Introduction to the EVM-part-1:-introduction) 2. Part 2: Memory and Storage on the EVM-part-2:-memory-and-storage) 3. Part 3: Execution Model of the EVM 4. Part 4: Relationship of the EVM with High-level contract-oriented languages The Ethereum Virtual Machine has three locations where it can store data; stack, memory, storage. Each of these storage locations play a major role in the execution model of the EVM and also helps to maintain the state of the blockchain. Before we talk about each of them, let's take a detour and talk about Ethereum Accounts.

Ethereum Accounts are objects with components such as storage state, intrinsic balance, number of transaction (nonce), 20-byte address, EVM code/smart contracts, maintained as part of the Ethereum state. Every account has a 20-byte address associated with it. An address is a 160-bit (20-byte or 40 characters) code used for identifying an account (e.g. 0x7053437291d7ef549f066f6802542106b59c0aee). An address is generated whenever a new Ethereum account is created.

There are two types of Ethereum accounts, and they share the same address space on the machine. - External Accounts: Accounts that are controlled by external entities, by an individual for example, using public-private key pairs. These accounts have no EVM code (smart contracts) associated with them, hence they have empty storage state and do not make use of memory. These accounts can be created using Ethereum Clients like Geth or Ganache.

The foregoing explanation highlights the fact that storage and memory on the EVM is always connected to an account. Let's go ahead and discuss each of the storage locations.

Whether I'm at the office, at home, or on the road, I always have a stack of books I'm looking forward to reading. ~ Bill Gates

As discussed in the first article-part-1:-introduction) of this series, the EVM is a simple stack-based architecture. All the computations on the EVM are performed on the stack. The operands for instructions are taken from the stack, and the result of intermediate operations are also stored on the stack. >A stack is a data type which serves as a collection of elements, with two principal operations: push which adds an element to the top of the stack, and pop which removes the topmost element from the stack. A stack with push and pop operations (source: site-bay)

Let's take simple example by adding 1 and 3 using the EVM stack. The instructions would look like this:

PUSH1 was used to push the digits 1 and 3 to the stack because the digits 1 and can conveniently fit into a byte (8 bits) when converted from decimal to binary. The output of this simple operation would be:

The EVM stack operates in a much complex way, but this gives us a fair idea of what the EVM could be doing.

To improve short-term memory significantly, reduce the stress in your life. And choose your parents wisely. ~ John Medina The second storage location is the Memory. The memory is a storage area that is created when functions calls are made to smart contracts. It is used to store temporary data such as function arguments, local variables and return values. Like the RAM (Random Access Memory) on x86-64 machines, the memory is volatile --- its data is lost when power is switched off.

The sample contract below shows how memory may be used on the evm when function calls are made. ```solidity contract AddTwoNumbers {

Structurally, the memory is a byte-array and can be accessed linearly via reads or writes of 8bits or 256bits. When a memory is freshly instantiated on the EVM, its initial size is zero, but it can be expanded by 256bits when accessing (reading or writing) a previously untouched memory word. At the time of this expansion, the cost in gas must be paid and this cost grows quadratically. The gas cost for memory operations are shown in the image below:

The EVM provides three opcodes to interact with the memory:

The more storage you have, the more stuff you accumulate ~ Alex Stewart

The third data location is the Storage. Storage on the EVM is a persistent key-value store that maps keys to values, the keys an values are 256-bits word. A smart contract can only read or write to its own storage, it has no access to the storage of external contracts. All storage locations are initially defined as zero.

Reading and writing to memory is very expensive. The cost of writing to storage is one of the highest amongst several EVM operations. Due to this high cost, it is not possible to enumerate storage from within a contract. The EVM provides two opcodes to interact with storage:

The cost of each of these operations is highlighted in the diagram below.

In Solidity, storage memory is represented as state variables declared outside of user-defined functions, within the context of the contract. Let's have an example code to understand how this works. The sample contract below stores the ages of certain persons in the contract storage when the contract is instantiated.

Solidity maps every state variable to a slot in storage starting from position 0. Fixed sized state variables such as oldest are stored in a slot in storage contiguously. For dynamic arrays like ages, the length of the array is stored in the next available slot (n, for example), while the data will be located at a slot number derived from the hash of n(keccak256(n)). For Mappings, their slots are unused, but the value for each key in the mapping will be located at a slot derived from keccak256(n, p), where n is the slot number the mapping is meant to fill originally, and p is the index of the item on the mapping which we would like to locate. The contract above will be deployed and its storage structure will be tested as shown below: 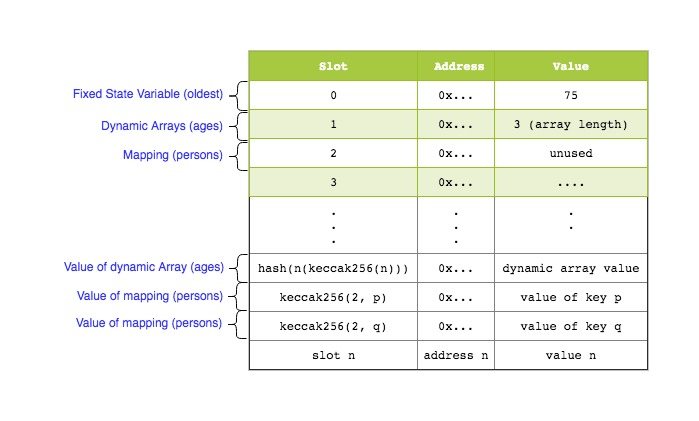 ##### Storage structure of the StoreAge contract

First, let's compile the contract and create a new contract instance using Truffle. Truffle is a framework for building dApps (Distributed Applications). It provides functionalities such as compiling, debugging, and testing smart contracts out of the box.

In this article, we expounded the details data management on the EVM. The EVM uses the stack to perform computations, memory is used to store data from function calls and the storage persists data on the Blockchain.

This is the first article of a 4-part series on the EVM; 1. Part 1: Introduction to the EVM 2. Part 2: Memory and Storage on the EVM 3. Part 3: Execution Model of the EVM 4. Part 4: Relationship of the EVM with High-level contract-oriented languages evm-architecture In computing, a virtual machine is an emulation of a computer system which may be implemented as a specialized hardware, software or a combination of both. (source: wikipedia) Virtual machines may be generally categorized into two ty